Vancouver, November 17, 2021 – Prime Mining Corp. (“Prime” or the “Company”) (TSX-V: PRYM, OTCQB: PRMNF, Frankfurt: 04V3) announces Phase 2 drilling is underway at its wholly owned Los Reyes gold-silver project in Sinaloa State, Mexico (“Los Reyes”). Phase 2 represents the Company’s second year of drilling at Los Reyes. Phase 2 will include over 250 new drill holes, for a minimum of 50,000 metres (“m”) with a focus on identifying additional higher mill-grade gold-silver mineralization identified in three corridors of mineralization at Los Reyes. Presently, the drill program includes up to eight diamond drills and up to three reverse circulation drills. Several new targets immediately adjacent to these corridors have been identified and will be drilled for the first time as part of Phase 2.

Daniel Kunz, Prime’s Chief Executive Officer, commented: “We are extremely pleased with not only the results from Phase 1, but also the progress we have made in our geological understanding, in only our first season of drilling at Los Reyes. With the rainy season now behind us, we are in the process of gaining full access to all areas of Los Reyes and already have six drills operating. This Phase 2 drilling will continue to advance the new discoveries made during Phase 1 at Guadalupe East, Zapote–Tahonitas, and Mina 20/21. Our team is excited to aggressively test our new geological understanding and exploration models we developed to target additional higher-grade mineralization.”

The Guadalupe deposits comprise multiple veins within a 5 km long structural corridor (see Figure 1: Los Reyes Drill Program Progress, Figure 2 Guadalupe East Drill Program Progress). To the southeast of Guadalupe East, there is approximately 900 m of strike length that remains open. Phase 2 drilling includes 75 planned core holes for approximately 23,000 m targeting the Estaca, San Nicolas and San Manuel veins along strike in both directions (to the west and to the southeast), and down-dip with step outs between 100 m and 280 m spacings. Surface mapping, sampling, and modelling is confirming the existence of more veins in the east and southeast parts of the deposit than previously recognized. Combined, these veins have the potential to significantly reduce the quantity of waste associated with the Guadalupe East open pit resource.

Z-T, with a strike length of over 1.8 km, remains open along strike and at depth (see Figure 3: Z-T Structure Drill Program Progress). Phase 2 includes 79 core holes for approximately 13,800 m to expand and link the Zapote North, South and Tahonitas deposits. Phase 2 drilling will follow-up on high-grade mineralization previously identified at depth ‘below pit’ at Zapote. Drilling will also follow-up on near-surface mineralization at Tahonitas encountered in Phase 1. This mineralization is at relatively shallow depth compared to the higher-grade mineralization in the adjacent Zapote deposit. Phase 2 at Tahonitas will test both the depth potential of the system and to the south-east, where the system remains open. Additionally, current mapping and sampling work shows that the Z-T structure has the potential to be extended northwest and potentially connecting with the Mariposa target.

This area contains San Miguel West, San Miguel East and Noche Buena and represents a 2.3 km structure that is relatively under-explored. Historical resources in the Central zone are relatively small-to-moderate in size but they remain open to further discovery and there are additional splays off the main structures including Las Primas, Fresnillo, San Miguel East north-arm, and a new emerging structure between Noche Buena and Las Primas that need to be tested. Phase 2 will include 54 core holes and will provide the first meaningful test of the potential of the Central Zone.

The new targets are each located within newly identified structures some of which have the potential to develop into new mineralized corridors. They are all within 4 km of the known gold-silver deposits. The Phase 2 budget includes 8,875 m to test Mina 20/21, Mariposa, Las Primas, Fresnillo, El Orito, and El Tule (see Figure 4: Los Reyes Property Drill Program Progress).

Mariposa is an area of historic small-scale mining. Phase 1 work included adit and drift sampling and detailed surface mapping that showed a strongly mineralized structure. Mariposa is likely an extension of the Z-T structure. Since the commencement of Phase 2, 1,785 m in 9 holes have been drilled.

The Fresnillo structure was encountered in two core holes during Phase 1 drilling in the Central Zone near San Miguel East. Additional drilling is required to assess this structure’s extent and potential. The aerial magnetic survey completed in Phase 1 identified another parallel structure.in this region which the Company plans to follow up and drill test.

Drill core at the Los Reyes project is drilled in predominately HQ size (63.5 millimetre “mm”), reducing to NQ or BQ size ranges (47.6 mm and 36.5 mm respectively) when required. Drill core samples are generally 1.50 m long along the core axis with allowance for shorter or longer intervals if required to suit geological constraints. Each entire hole is split, and one half is submitted for assay. Sample QA/QC measures of unmarked certified reference materials, blanks, and field duplicates as well as preparation duplicates are inserted into the sample sequence and make up approximately 8% of the samples submitted to the lab for each drill hole.

Samples are picked up from the Project by Bureau Veritas and transported to their laboratory in Durango, Mexico, for sample preparation. Sample analysis is carried out by Bureau Veritas, with fire assay, including over limits fire assay reanalysis, completed at their Hermosillo, Mexico, laboratory and multi-element analysis in North Vancouver, British Columbia, Canada. Drill core sample preparation includes fine crushing of the sample to at least 70% passing less than 2 mm, sample splitting using a riffle splitter, and pulverizing a 250-gram split to at least 85% passing 75 microns (code PRP70-250).

Scott Smith, P.Geo., Executive Vice President – Exploration, is a qualified person for the purposes of National Instrument 43-101 and has reviewed and approved the technical content in this news release.

Los Reyes is a rapidly evolving high-grade low sulphidation epithermal gold-silver project located in the prolific Sierra Madre mining region of Mexico, specifically on the border of Sinaloa and Durango States. Previous operators have spent over $20 million in exploration, engineering and prefeasibility studies over 25 years providing valuable historical data on the project.

Prime Mining has completed an initial, Phase 1 comprehensive analysis and exploration program, including over 22,000 metres of drilling. Results show that the deposits are much larger than previously reported with several new bonanza grade gold-silver discoveries outside of the currently defined resources. Originally considered to be a small-scale, high-grade heap leach operation, Los Reyes is quickly transitioning to become a high margin open pit milling operation.

The project continues to be vastly underexplored with potential for additional discoveries and resource expansion upside based on open extensions of known deposits, multiple untested high priority exploration targets, and only 40% of the known structures systematically explored leaving over 10 kilometres of untested strike length.

Prime Mining, (member of the TSX Venture 50) is an ideal mix of successful mining executives, strong capital markets personnel and experienced local operators who are focused on unlocking the true potential of the rapidly evolving high grade Los Reyes gold-silver project in Mexico. Prime Mining has a well-planned capital structure with significant team and insider ownership.

The TSX Venture 50 is a ranking of the top performers in each of 5 industry sectors on the TSX Venture Exchange over the last year.

ON BEHALF OF THE BOARD OF DIRECTORS 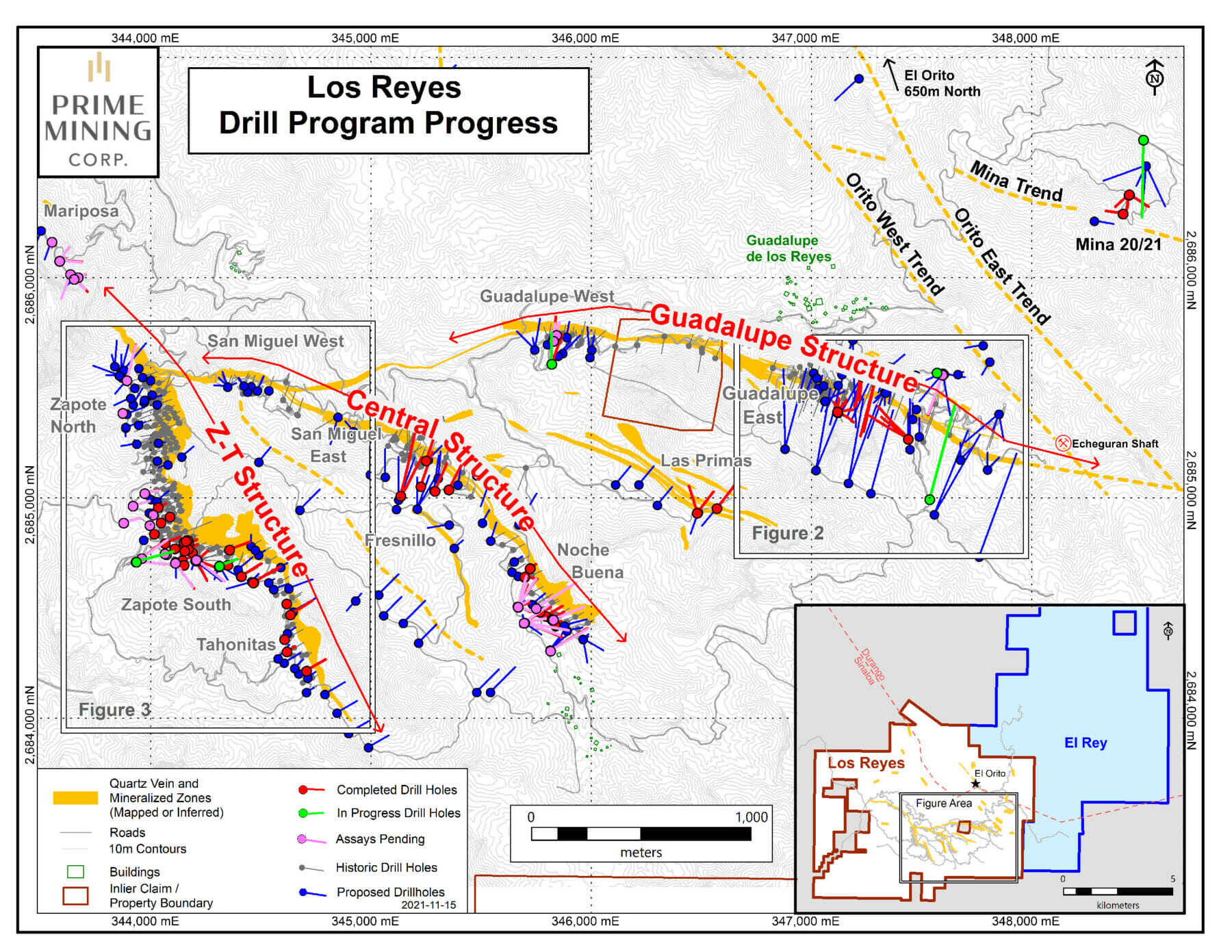 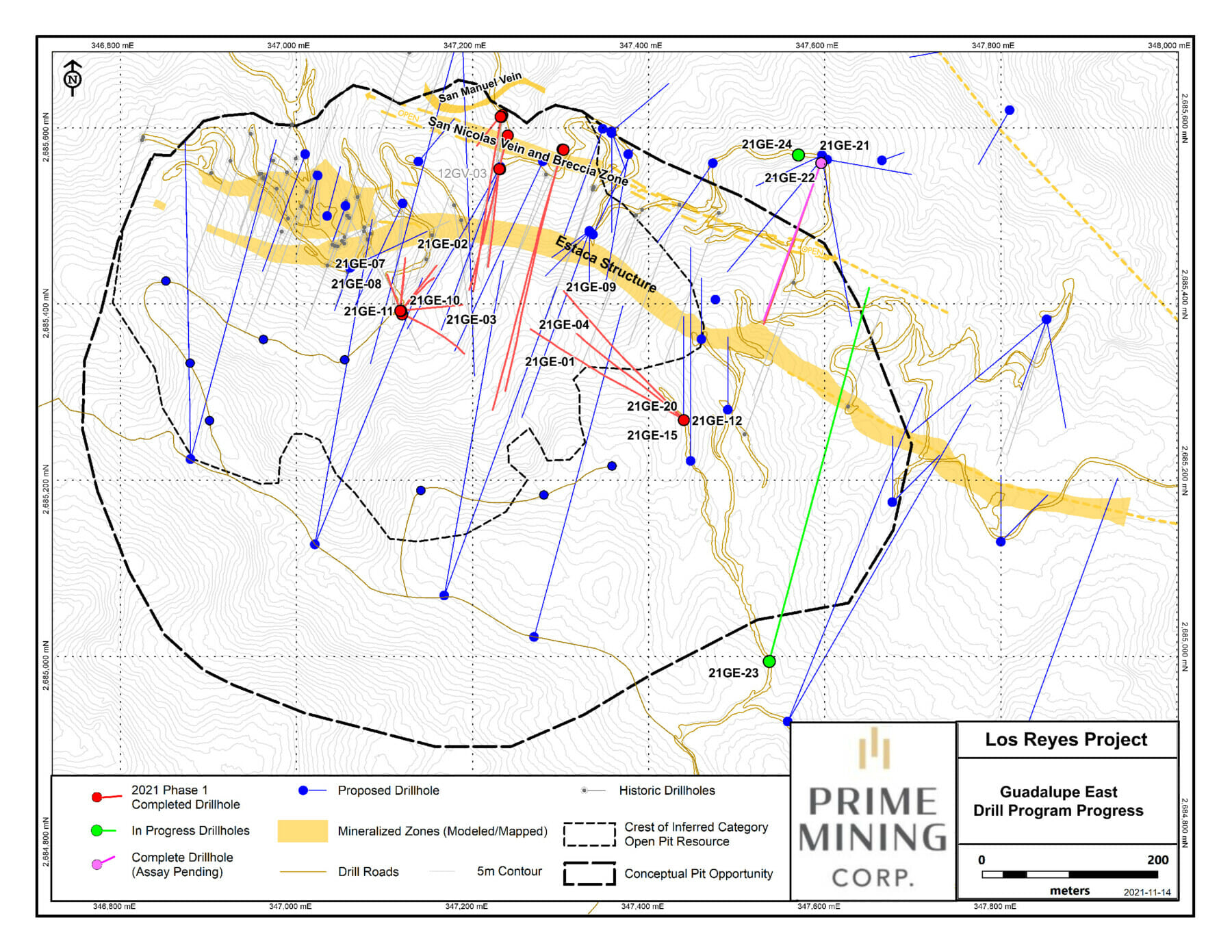 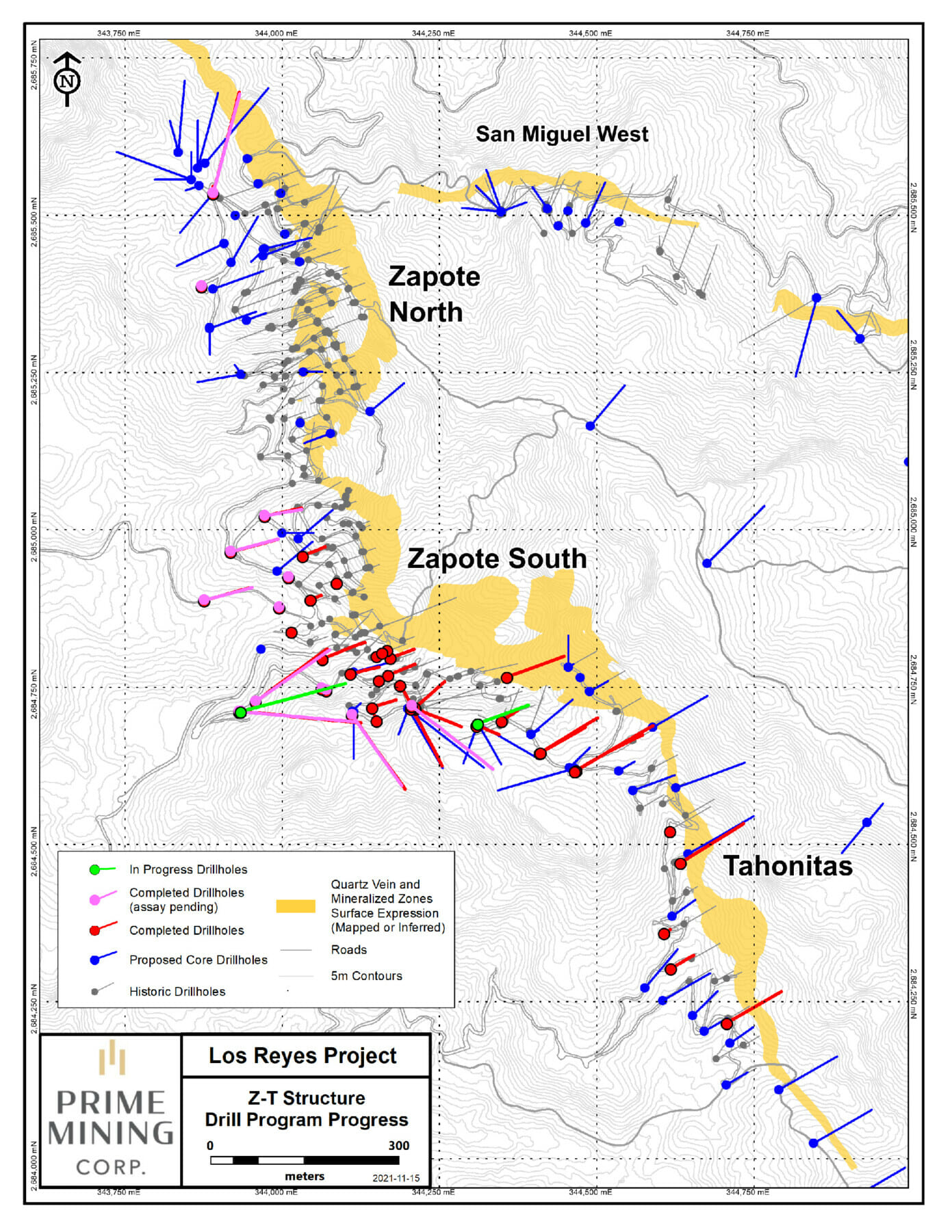 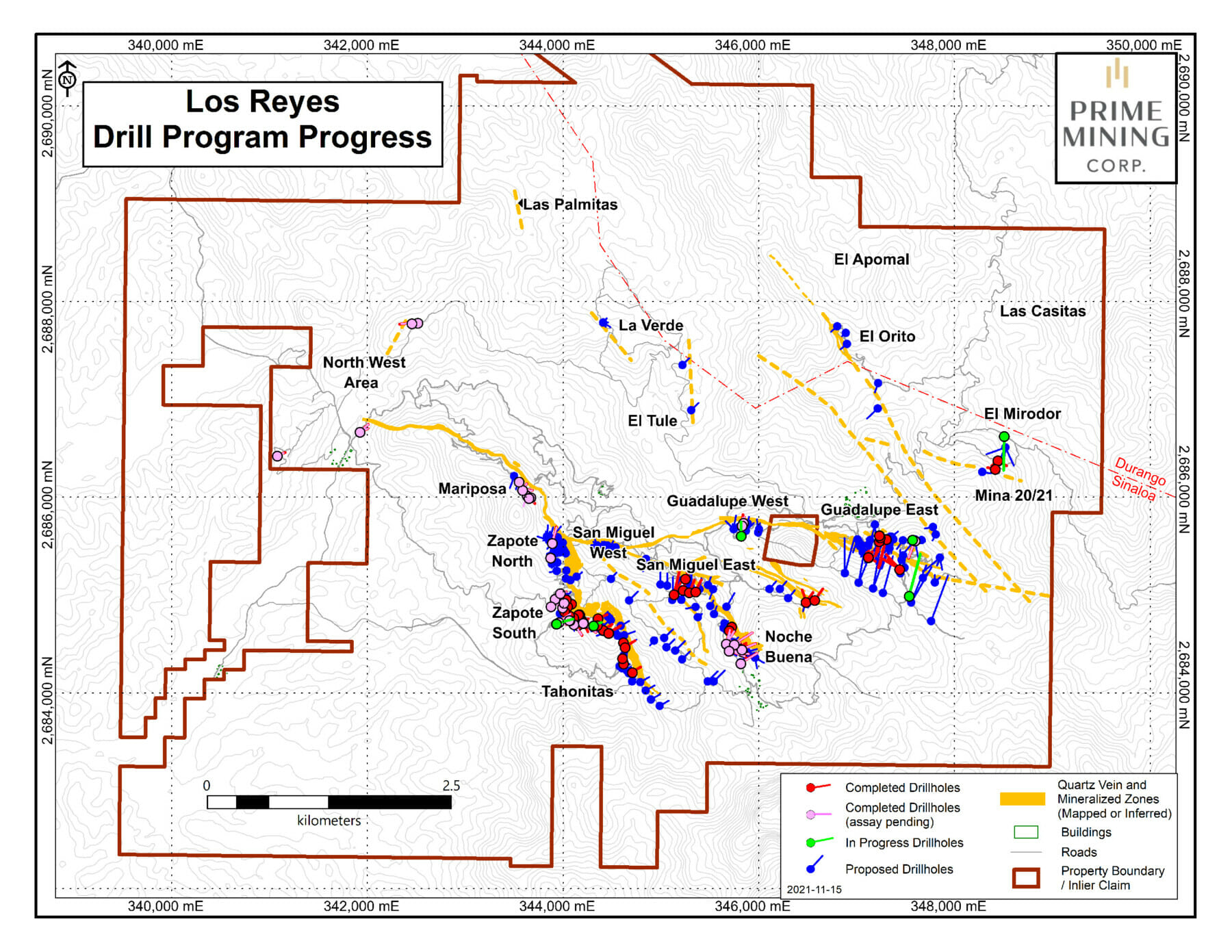