Vancouver, March 10 – Prime Mining Corp. (“Prime” or the “Company”) (TSX-V: PRYM, OTCQB: PRMNF, Frankfurt: A2PRDW) is pleased to announce it has filed an application for mineral rights to a 7,500-hectare claim block, named El Rey, adjacent to the eastern and northeastern Los Reyes boundary.  El Rey had its cornerstone monument erected and completed February 24, 2021 and the concession application was filed and receipted March 9, 2021.

“Recent prospecting, surface sampling, and drilling results suggest the Eastern regions of Los Reyes are likely very prospective. Current work has identified low sulfidation epithermal-style mineralization at 540 to 1080 metres (“m”) above sea level at the Guadalupe East deposit and at historic adits some two kilometres to the east, respectively. We are now more confident that the local mineralized system is at least 500 m in vertical height,” Daniel Kunz, Chief Executive Officer of Prime Mining Corp commented. 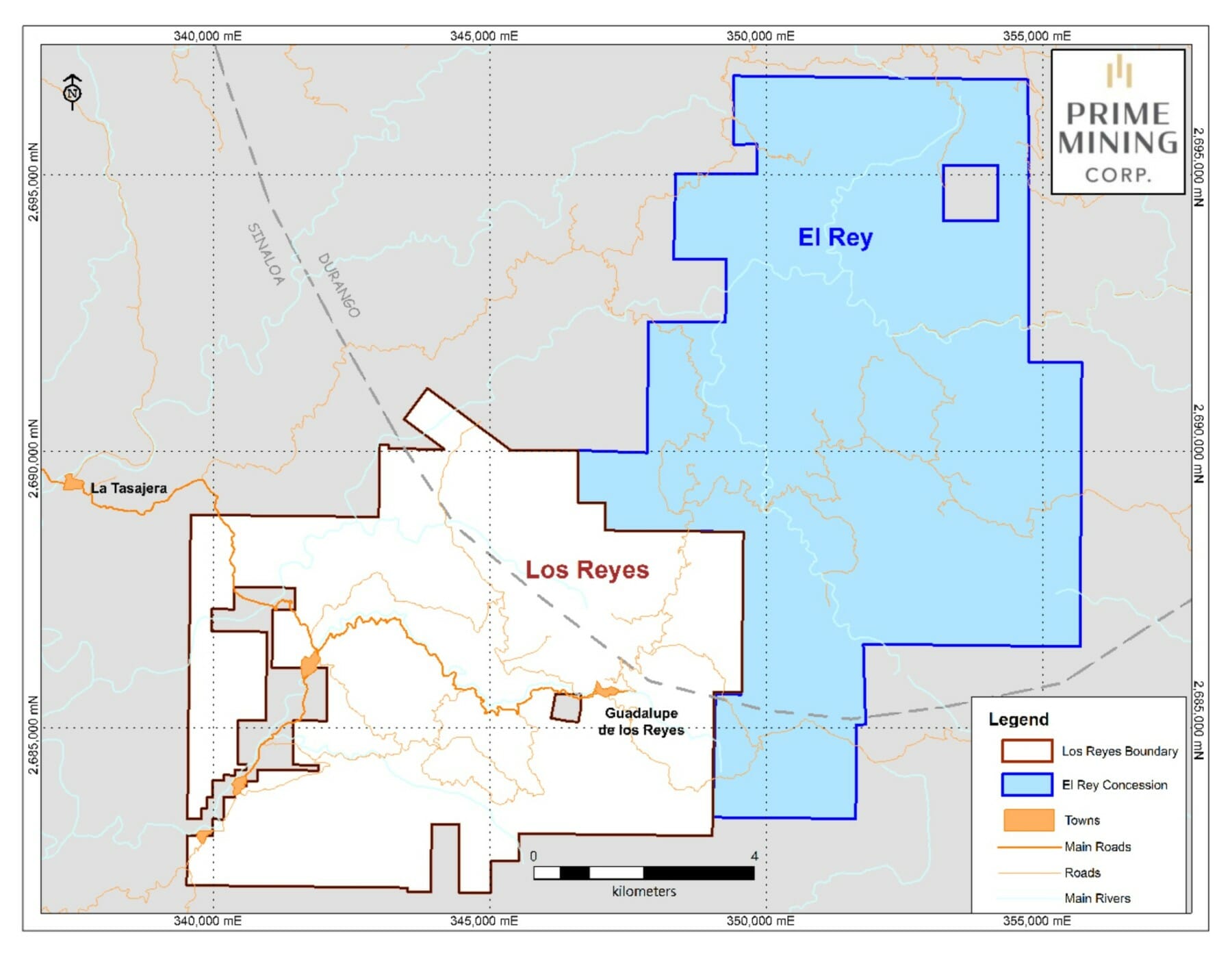 The initial delays in drilling progress that occurred at Los Reyes have been overcome.  Progress is being made in the drilling program, with fifteen core holes completed and five ongoing with the resultant core at various stages of preparation, assay, and analyses.  The Company expects to have enough data to issue its first news release on drilling results next week.

Prime has also initiated a property-wide 1,000 line-kilometre helicopter-borne high resolution aeromagnetic survey over the Los Reyes property. Following the magnetic survey, a LIDAR (Light Detection and Ranging) and Orthophoto survey will be completed. These surveys will aid in the ongoing geological mapping of the Los Reyes property and provide critical information on the numerous partially tested and untested structures that host Au-Ag epithermal veins.

Prime has a longstanding relationship with the Cosala community and is providing support for the local communities including Ejido Tasajera. Now in the dry season, the Company’s subsidiary, Minera Amari, recently began work to provide drinking water access to local livestock. During the last rainy season, the Company helped families with repair of flood-damaged home foundations and provided strategic road and drainage grading.

Kerry Sparkes, P.Geo., Executive Vice President of Exploration, is a qualified person for the purposes of National Instrument 43-101 and has reviewed and approved the technical content in this news release.

Los Reyes is a district scale low sulphidation epithermal gold-silver project located in a prolific mining region of Mexico.  Over $20 million in exploration, engineering and prefeasibility studies have been spent on the project over 2 1/2 decades by previous operators with development plans being held back due to declining gold prices. Historic data coupled with an existing and recently updated resource estimate has provided sufficient understanding to fast-track the project to production. However, there is substantial resource expansion upside based on open extensions of known deposits, multiple untested high priority exploration targets, and only 40% of the known structures systematically explored leaving 10 kilometres of untested strike length. Potential for significant growth of the resource remains strong.

ON BEHALF OF THE BOARD OF DIRECTORS