“Los Reyes is an exceptional opportunity for exploration and development. The Company will continue to drill in order to expand existing resources as well as identify promising new targets.”   —Prime Mining CEO, Daniel Kunz

Prime Mining’s Los Reyes project is located 43 kilometres south-east of the mining-friendly city of Cosalá, Sinaloa, with a land package of contiguous claims totaling 13,800 hectares. The project is located in the historically productive Guadalupe De Los Reyes mining district, which has an extensive mining history stretching back into the 1700s. 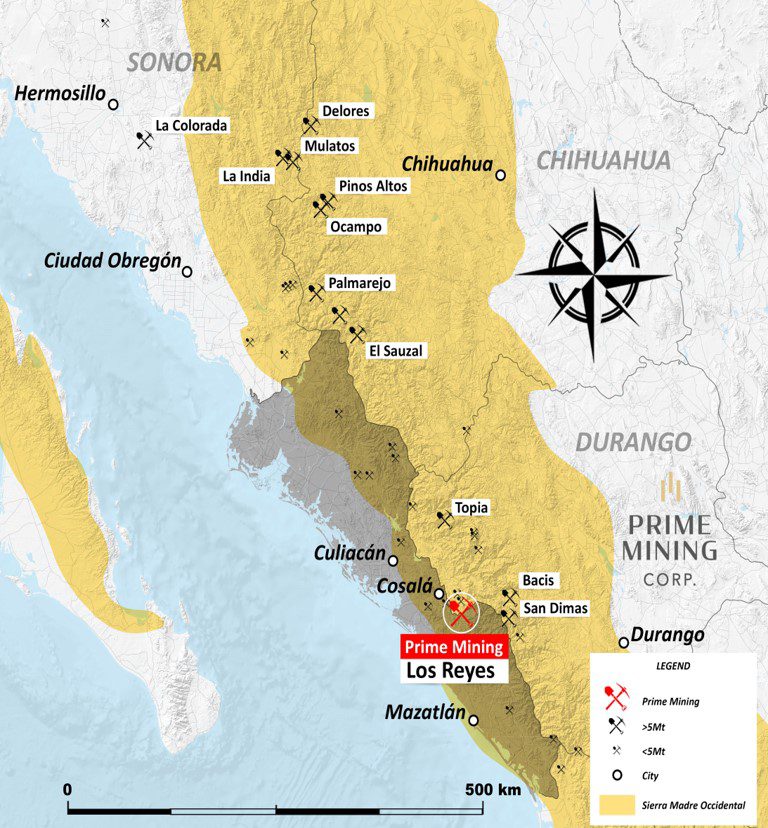 Gold and silver were discovered at Los Reyes by the Spanish in the late 1700s and mining occurred in the area for over 150 years up until the 1950s. The Guadalupe de los Reyes underground mine opened in the late 1800s and to date is the most significant source of gold production in the district. It is estimated to have produced 500-600,000 oz of gold and 40M oz of silver at reported grades of +10 g/t Au and +500 g/t Ag.

From the 1950s through the 1980s there was limited activity in the Los Reyes area other than mostly exploration reconnaissance studies. Modern drilling began at the Los Reyes area in the 1990s and was targeted at defining shallow and lower-grade gold-silver mineralization in areas surrounding the Los Reyes underground operations. Since that time, over 50,000 meters of RC and core drilling have been completed within the current project boundaries resulting in extensive area-wide resource data.

The Property was drilled between 1993 and 2015 by several companies including Northern Crown Mines, Meridian Gold, Vista Gold Corp., and Great Panther Silver Limited.

A total of 493 holes were previously drilled (reverse circulation and diamond drilling) totaling over 51,000 metres.

Prime’s Los Reyes property consists of a land package comprised of 37 contiguous concessions, totaling to a property size of 6,273 hectares. An application has been made for an additional 7,500 hectare  concession, the El Rey.

The Property is in the Guadalupe de los Reyes mining district in the western foothills of the Sierra Madre Occidental mountain range, Sinaloa State, México. In the vicinity of the Property, the volcanic sequence unconformably overlies a late Cretaceous-aged felsic batholith. This overlying volcanic package is subdivided into Lower and Upper sequences that are separated by an angular unconformity.

The Lower Sequence spans from late Cretaceous-early Tertiary, is approximately 1 km thick, and is predominantly composed of intermediate (andesite) volcanics, felsic intrusives and related felsic (dacite to rhyolite) volcanics, intercalated sandstone and volcanic conglomerate intervals.
The upper sequence, which is deposited unconformably on the lower sequence, is composed of ash-flow and ash-fall tuffs that are rhyolitic to dacitic in composition. In the main area of mineralization, the deposits dominantly occur along three northwest and west-northwest oriented silicified structural corridors. 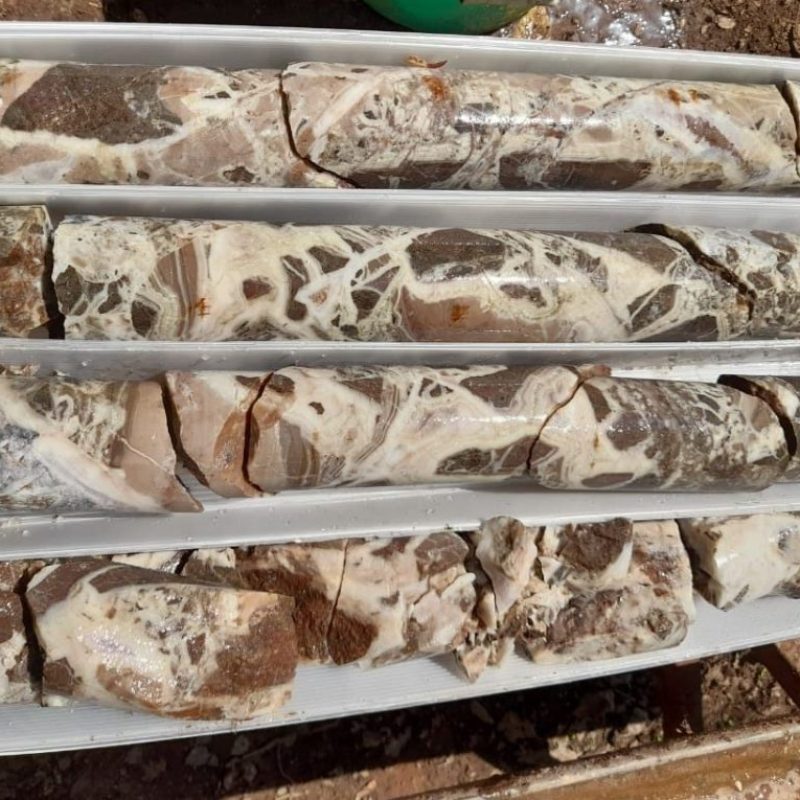 These mineralized structural corridors are named after the hosted mineralized areas which include:

The highest grade of the eight known deposits, has the greatest expansion potential and as a result will be the primary area of focus. It is proving to be an exceptional open pit prospect coupled with mill-grade material.

Adding known historical underground workings, the total strike length of the Guadalupe East vein system is 1,000 m. For reference, our April 2020 oxide Pit-Constrained Resource reflects a mineralized strike extent of only 120 m at Guadalupe East based on open pit mining and heap leach parameters. The high-grade gold-silver values reported from our Phase 1 drill program indicate that conventional milling, with much higher silver and gold recoveries, may be the preferred processing method going forward.

At Tahonitas, initial shallow drilling returned strong near-surface mineralization well above the corresponding elevation at which high-grade is encountered at Zapote South along with high-grade silver data not previously analyzed for and could potentially have a material positive impact on the economics of future mining operation at Los Reyes.

New targets include Mariposa, Las Primas, Fresnillo, El Orito, El Tule and of major significance, Mina 20/21, a new discovery from Phase 1 located approximately 1.2 km NE from the Guadalupe East deposit. Initial exploration at Mina encountered high grade gold and silver values and as a result is a high priority target in this next phase of drilling.

Note that the Resource Calculations shown below are dated April 2020, and do not include drill results from Prime Mining’s Phase 1 or Phase 2 drill program.

Prime Mining has completed two phases of drilling over the last 2 years at Los Reyes with completion of over 100,000 meters in 401 holes. Results to date show that the deposits are much larger than previously reported with several new discoveries including bonanza grade gold-silver mineralization discoveries outside of the currently defined resources. Originally considered to be a small-scale, high-grade heap leach operation, Los Reyes is quickly transitioning to become a high margin open pit milling operation.

The project continues to be vastly underexplored with potential for additional discoveries and resource expansion upside based on open extensions of known deposits, multiple untested high priority exploration targets, and only 40% of the known structures systematically explored, leaving over 10 kilometres of untested strike length.

Phase 3 drilling has commenced and expected to run from November 2022, through October 2023 and will continue to focus on identifying new potential deposits in the project area, and increase the resource quality and quantity of current, known deposits. Presently, the drill program includes 5 drills operating on site.

Targeting Estaca, San Nicolas and San Manuel veins along strike in both directions (to the west and to the southeast), and down-dip with step-outs between 100 m and 280 m spacings.

Follow up on high grade mineralization identified at depth ‘below pit’ at Zapote and expand and link Zapote North and South deposits to the Tahonitas deposit.